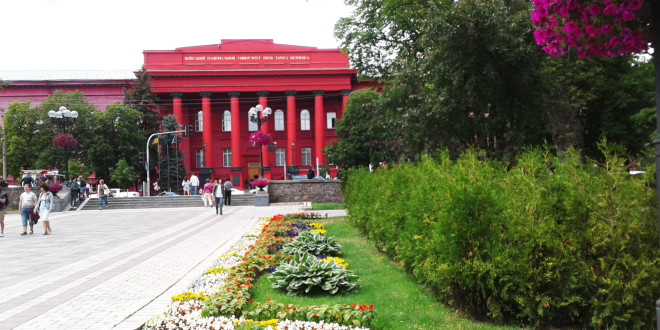 Red building of the National University by T. Shevchenko is one of the things to see in Kiev.

During your visit to Kiev please pay attention on the T. Shevchenko boulevard – it is very wide and originally was 2 km long. Before the Univesity was built there, the street did not exist.

Now let me tell you top facts about one of the must see places in Kiev during your stay!

The solemn beginning of the new university building took place on July 31, 1837, on the deserted outskirts of Kiev. Professor of architecture at the Petersburg Academy of Arts – V. Beretti was appointed as a main designer of the building.
During1838-1842 huge university building had been erected in the style of Russian classicism.
On the foundation laying ground, a medal with the year of construction was put.
In addition to the medal in the foundation laid a stone from the Church of the Tithes foundation, a copper plate and three coins: platinum, gold, silver. On this occasion a special medal with the image of the Russian Emperor Nicholas I on one side and a cross in the radiance with the inscription “In your light we will see the light!” was issued.
The main Red building of the university is a huge enclosed building (145.68 m long) with a courtyard inside. The motto of the same order “Utilitas, Honor et Gloria” (Good, Honor and Glory in Latin). This became the motto of the university.
When Beretti worked on the corps project, it was not yet known from which side of the building the Vladymyrskaya street would be laid. That is why the architect made presentable both eastern and western sides. Now the eastern part goes to Vladymyrskaya Street, and the western part to the modern Botanical Garden.
Red University became 6th by the number in the Russian Empire.
In 1834-1835 there was philosophical faculty with two branches: the history-philological and the physic-mathematical.
62 students entered the first course and on August 28, 1834, classes began at the university.

Until the 20s XX century there was Catholic University in the northern part of the University and the Orthodox University Home Church in the name of St. Vladimir – in the southern part.
Student’s dormitories were located on the fourth floor of the Red Corps (also they were known as “student cells”).
The university square, the eastern facade of the University, was transformed into the “University Garden”. Later it was renamed to Nikolayevsky Garden in honor of the founder of the University – the Russian Emperor Nicholas I.
In 1896 the monument to the emperor was erected, in the same park.

March 9, 1939 monument to Taras Shevchenko was installed instead of the monument to Nicholas I. On the honor of celebrating the 125th anniversary of poet’s birth.

In November 1943, the retreating German troops burned the Red Corps. In general, about 70% of the university’s territory was destroyed after five explosions and fires.
In 1944-1945, Professor P. Aleshin and his team prepared a restoration and reconstruction project. The main task was to preserve the style of the architecture of the house and adapt to the modern requirements.
In 1978 the University’s History Museum was opened instead of the church. Where, in the same 1920 year the St. Vladimir’s Orthodox Church was replaced by the Komsomol meetings hall. Later, in the 1990s, this room was converted into a sports hall.
On October 15, 2009, the opening ceremony of a memorial plaque on the facade of the Shevchenko University Red Corpus was given to the outstanding architect, the builder of the Red Corps Vincenzo Beretti (1781-1842).
April 21, 1994 Kiev University was given the status of the National.
Nowadays there are 13 faculties and 26 thousand students in the University!

Why is the University building so red?
All my tourists are keep wondering why the university is so red.
There are a number of versions explaining this:
• According to the official version of the Russian Empire, the red color of the university walls is related to the ribbons of the Order of St. Vladimir (red and black). In the Soviet times the red walls was explained as imitation of the Winter Palace color in Leningrad.
• The next version is associated with an “error”. Apparently the color of the walls was planned to be the same as that of Winter, but when inexpensive Italian paint was delivered to Kiev, something was mistakenly mixed up in mixing the ingredients, resulting in the paint becoming bright red. However, they did not change anything and decided to paint the walls with the resulting tone of paint. And only then in the “justification” they remembered about the ribbons of the Order of St. Vladimir.
Another versions you will have a chance to learn during your Kiev visit and Kiev tour.

Here you may find more things to see in Kiev!