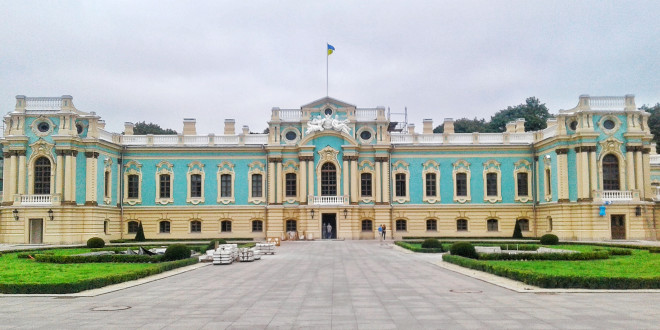 Maryinskiy palace in Kiev is a President’s of Ukraine mansion-house, it is also called President Palace — here solemn state events, rewarding, receptions and meeting of official delegations are held.

Empress Elizaveta Petrovna (daughter of Petr I) once visiting Kiev was fascinated by city’s beauty and ordered to built a special palace for the royal family, she has personally chose the place for future building in Pechersk district. Maryinskiy palace was constructed in 1750-1755 by the project of main royal court architect Bartolomeo Rastrelli, who had constructed Winter Palace (Zimniy Dvorets) in Saint Petersburg. In various years in Maryinskiy palace stayed members of tsar family and higher aristocracy representatives during their visits to Kiev.

Maryinsky palace on the map.

You may see Maryinskiy Palace during Kiev history tour.