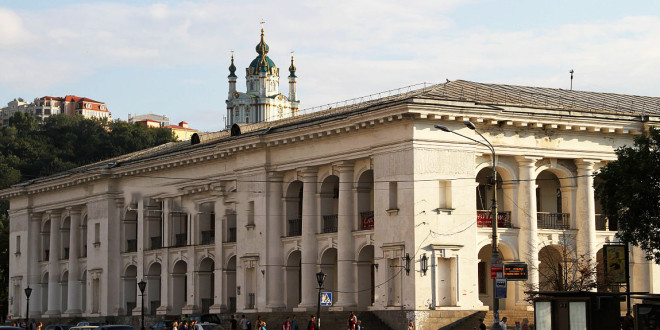 Kiev is impossible without Podil! Any historian, tour guide and just a man in love with our capital will assure you in this.

During the Podil tour you will be amazed with the outstanding architecture of 18 and 19 centuries, you will find out where the 1st electric tram in times of the Russia empire started to operate; you will learn why Contract square is called so and visit one of the oldest churches in Kiev. And most important you will understand why Kiev is impossible without Podil (Podol)!

We will start our Podil tour from the metro station Pochtova Square. Here the street, Petra Sagaidachnogo begins, which was known as the Great Pavement street several centuries ago (later – Alexandrovskaya). It was named so because first paving stones in Kiev were put here. Leaving the metro, we immediately will see the Church of the Christ Nativity, which was built in the distant 1520 by the architect Andrei Melensky. Later in 1810-1814 it was reconstructed from the wooden into the one.

Then you will be amazed with the Kontraktova (Contract) square – the trade and handicraft center of the ancient Kyiv.  Kontraktova square – center of Podil, has been known since prince’s times as a shopping center, but already in the 17th-19th centuries it became also the public center of Kiev. The Kiev city Magistrate building was placed here, not on Kreshatyk street as one may think!

During the Podil tour you will see:

Price: from 15$ per hour
(does not include entrance fees and transportation services)
Duration: about 3-4 hours.

More Kiev tours with private guide you may find here