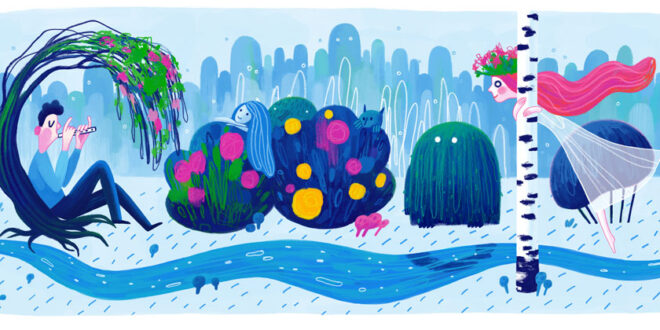 There are so many talented and famous Ukrainians and today we are going to speak about one of them – Lesya Ukrainka!

www.yourkievguide.com has prepared interesting facts from her biography.

Who was Lesya Ukrainka?

The poetess Lesya Ukrainka, who is called to be the brilliant daughter of the Ukrainian people, the beauty and pride of the nation, the spiritual leader of the Ukrainian intelligence, was born on February 25, 1871 in Novograd-Volynsky (Western Ukraine) under the name of Larisa Kosach.

Her mother – Olena Pchilka – was a writer and an active participant in the pro-Ukrainian movement.

Lesya had a lot of talents even in yearly childhood. Lesya Ukrainka learned how to read at four years old, at 5 y.o. – how to play the piano, and at 8 y.o. – began to write poetry. At 12 y.o. she was already published in literature magazines.

At the same time, she became ill with tuberculosis of the bones, and had to leave music.

She had studied 11 languages by herself, including Latin and Greek. Lesya Ukrainka translated works by Homer, Hugo, Byron, Heine, and Shakespeare. She has written more than 100 poems and 20 dramas.

Lesya Ukrainka’s main sources of creativity were her own experiences. Thanks to them, the works of Ukrainian poetry have appeared extremely beautiful in their depth of lyricism, spiritual drama and psychologism.

Lesya Ukrainka became the largest collector of the Ukrainian folklore, and knew about 500 folk songs.

In the modern Ukrainian tradition Lesya Ukrainka is included in the list of the most famous women of ancient and modern Ukraine. Most of her works have been published abroad in Berlin, Dresden, Prague, Vienna.  “Mavka. Forest Song” – is her most famouse and popular work.

Death caught up Ukrainian poetess at the age of 42 in Georgia on July 19, 1913. Lesya Ukrainka was buried in the Baykovo cemetery in Kyiv.

Monuments and awards in honor of Lesya Ukrainka

In Soviet times, the literary award in honor of Lesya Ukrainka for the best children work was founded.

In 2004, the “Lesya Ukrainka’s Prize for Literary Works for Children and Youth” was established.

On February 25, the National Bank of Ukraine put into circulation a new banknote of 200 hryvnya with the image of the great Ukrainian poetess – Lesya Ukrainka. She was born on this day 149 years ago.

Germany occupied a special place in the life and work of Larisa Petrovna Kosach. The need to be treated for a serious illness brought her to the country. In January 1899, a professor at the University of Berlin Ernst von Bergmann operated on a 27-year-old Ukrainian writer suffering from bone tuberculosis, after which Lesya Ukrainka spent almost another six months in Berlin. During this time, she made brilliant translations from the German works of Heinrich Heine and wrote a number of her own creative works in German.

University and the Museum of Archeology in Melbourne (Australia) are named after Lesya Ukrainka.

Lesya Ukrainka’s monuments were built not only in Ukraine. She is immortalized in granite and marble in Toronto, Cleveland, Batumi, Saskatoon.

In Kiev Lesya Ukrainka lived and worked on Saksagansky Street and Vetrova street.

The Academic Theater of Russian Drama in the center of Kiev was named after her, as well as the boulevard and Lesya Ukrainka Square on Pechersk.

Also in Kiev there is a mural dedicated to the Ukrainian poetess Lesya Ukrainka, located near the Golden Gate on Streletskaya Street 28. Its creator is Australian street artist Guido Van Helten. Mural occupies the entire front wall of a seven-story house.

Let us finish with the most famous poem written by Lesya Ukrainka in 1893.

Yes, I’ll smile, indeed, through tears and weeping
Sing my songs where evil holds its sway,
Hopeless, a steadfast hope forever keeping,
I shall live! You thoughts of grief, away!