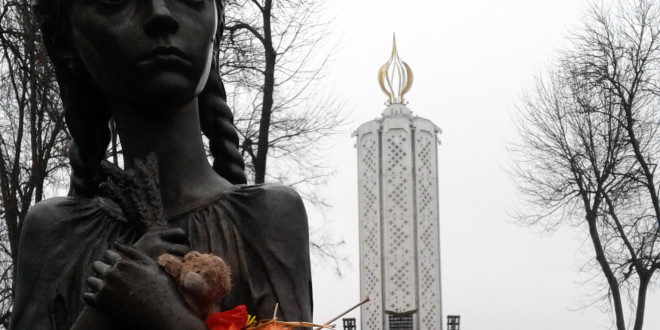 On one of Kyiv hills there is a huge candle, symbolizing the trembling of human life, and nation praying for those who are not with us…

Two sorrowful angels are standing down in the alley in front of the Memorial. In the middle of a circle there is a statue of a hungry girl clutching wheat ears in her hand. This place will show you very sad page in history of Ukraine but this sight is one of ‘what to see in Kyiv’.

Under the Memorial’s candle there is museum exposition showing the depth of the catastrophe of the Ukrainian people.

Museum of starvation is very sad page in the Ukrainian history but surely one of things to see in Kiev.

Starvation monument has a shape of candle – symbolizing people who are not with us anymore.  In orthodox religion we have a tradition to put on a candle in order to honor and remember reposed people.

Memorial to Victims of Starvation (with the memorial Eternal Glory) is included to the state official ceremony. This means that each foreign delegation, which visits Ukraine on an official level, should visit the museum and light a candle, honor memory of the victims inclination of the head (official visit), or even planting a bush viburnum (official visit).

Presidents of the United States, Canada, Lithuania, Latvia and Russia had already visited and honored this place.

If you go down from the Memorial to the middle terrace of the hill, you can see a long line of granite stones, from the bottom to the top written with names of Ukrainian settlements.

This is the list of people who perished in whole villages …

Near the monument you will find so called – Alley of the black plate with the village’s manes, which failed to fulfill unrealistic grain procurement plans. As the result all people of villages died because of hunger.

In the lower part candle is belted with four crosses in the form of windmills wings. One cross per each starvation period (1921-22, 1932-33, 1946-47) and the fourth central is devoted to all Ukrainian starvations. Crosses-cages at the foot of the candle are decorated with the gold cranes. They are chained in the cages but one managed to escape. It is a symbol of revival of Ukrainian nation.

Starvation memorial complex on the map.

You may visit starvation memorial candle during Kiev history tour.