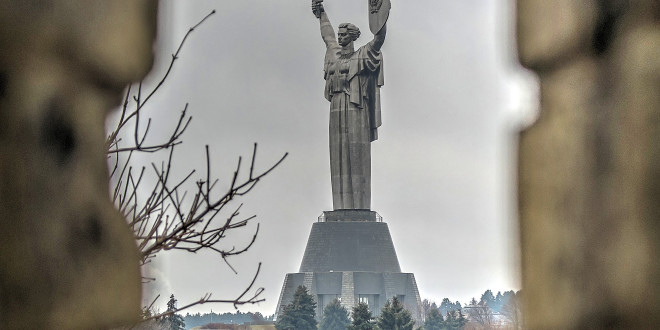 Rodina-mat — monumental women’s sculpture dominating Dnieper hills and visible from remote locations. It’s height is 102 meters, which is higher than Independence monument in the USA.

Monument plating was melted in Zaporozje, it was manufactured from 1.5 mm thick sheets of stainless still, sized 50×50 sm. Than it was welded in Kiev Paton institute. Total seam length is about 30 km. Monument was manufactured from welded together separate block-sections, 25-30 tons each. In one hand it holds shield with the National Emblem of the USSR (weight — 13 tons), in another — 16 m long sward, weighting 9 tons.

Monument was assembled using 100-m crane, which according to official information was in turn manufactured on one of the Donbas blast furnaces but according to non-official sources was ordered from the Japanese company KATO. It was specially negotiated that assembly parts will not contain. It was not enough time to dismount the crane before the official opening ceremony. Therefore it was simply cut into pieces and dumped into the Dnieper. They may be still found there.

Rodina-mat was opened on May, 9 1981. Opening ceremony was attended by the General Secretary of the Communist Party Leonid Brezhnev.

The whole complex occupies a territory of 20 hectares. It also includes Great Patriotic war museum, located directly under the monument, cup «Fire of Glory», alley of cities-heroes, site of the military equipment of the Great Patriotic war and multiple sculptures, symbolizing heroic fight at front and rear.