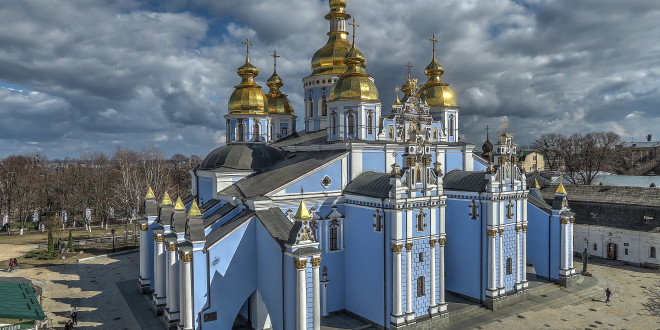 St. Michael’s monastery was founded in 1108 by the son of Grand Duke of Kiev Izyaslav Yaroslavovich. In the same year had started the construction of the main monastery temple — St. Michael’s Cathedral. Its creation was commemorated to Russian people victory over polovtsy.

The Cathedral has been built in honor of Archangel Michael, the guardian angel of Kiev. Among Kiev churches St. Michael’s Cathedral was the second largest one.

In 17-18 centuries St. Michael’s cathedral was several times rebuilt — the number of domes was increased and the walls were strengthened.

In 1934-35 destroyed by the decision of the Soviet communist party. The St. Michael’s Golden Domed Cathedral was 822-year old before it was destroyed.

Anew built cathedral looks like as it was reconstructed in XVIII century in Ukrainian baroque style. Mosaics and wall paintings were returned to Ukraine and placed in cathedral.

You may visit St Michael’s cathedral during Religious Kiev.