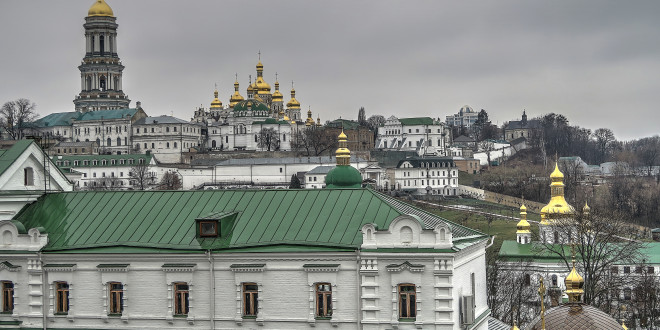 Together with St. Sophia Cathedral it is inscribed to the UNESCO Word Heritage Site.

Kiev Pechersk Monastery was founded in the 11 century and has been built during the next 9 centuries.

Kiev Pechersk Lavra is the largest Orthodox shrine in the world throughout the Christian world, second is only the Vatican.

Since its foundation as the cave monastery in 1051 the Lavra has been a center of the Eastern Orthodox Christianity in Eastern Europe.

It was named one of the Seven Wonders of Ukraine on August 21, 2007, based on voting by experts and the internet community.

The word lavra is used to describe high-ranking monasteries for monks of the Eastern Orthodox Church. Therefore the name of the monastery is also translated as Kiev Cave Monastery, Kiev Caves Monastery or the Kiev Monastery of the Caves.

For more than 900 years the imperishable bodies of the monastery’s founders – the Venerable Anthony and Theodosius, Agapit the healer, Nestor the Chronicler, and relics of another 118 saints lie here.

You may visit monastery and caves during Kiev-Pechersk Cave Monastery tour.