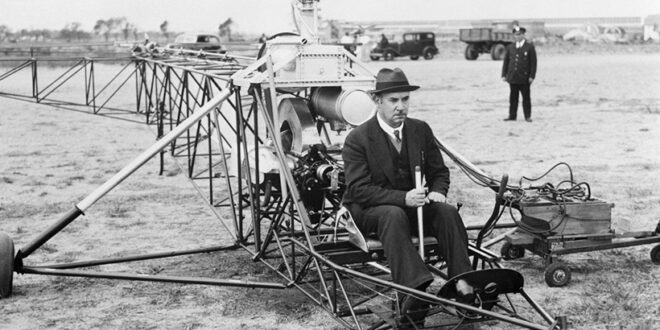 Igor Sikorsky in his plane

Who is inventor of the helicopter?

Today we will tell You about famous Ukrainian  and the man who conquered the sky – Igor Sikorsky. Every day the Presidents of the United States,  the Prime Minister of Canada, and France fly on Sikorsky’s helicopters.

The intellectual potential of Igor Sikorsky is amazing. For his long design career, he received 80 honorary awards, including the John Fritz Medal. In aviation, only Orville Wright got this honor. He is the only one in the world known as – Mr. Helicopter.

All US presidents choose Sikorsky helicopters. Their constant choice is the best evidence of the reliability of helicopters.

Pan American Airlines earned its popularity around the world thanks to the purchase of aircraft produced by Igor Sikorsky.

Who is Igor Sikorsky?

Born in Kyiv in 1889, Sikorsky became world known thanks to his genius in aircraft design.

The idea of an aircraft completely captured the imagination of the boy after becoming acquainted with the works of Leonardo da Vinci. Family legend says that Igor Sikorsky had a dream in which he saw himself as a pilot of a large aircraft flying above the sea. Igor invented the first operational model of the aircraft at the age less than 12 years old.

In 1911, he managed to raise the plane to a height of 100 m and stood at that height for ten whole minutes!

The young aircraft designer creates the world’s first heavy aircraft – the giant Ilya Muromets, which could fly in winter and land on snow, changing wheels to ski. Igor Sikorski got award from Nicholas II for giant heavy aircraft invention.

In 1917 Igor Sikorsky emigrated to France, and then to the United States. In 1923, with the financial support of the composer Sergei Rachmaninov, he created his company – “Igor Sikorsky Aero Engineering Corporation”. The first design bureau of the corporation was located in a former chicken coop. The company employed only six people, and parts for structures were often found in a landfill. Sikorsky Air Company exists till today.

First helicopter flight across the ocean

The only Sikorsky dream was to create a helicopter. Quote: “When working on airplanes, I never forgot my dream – a helicopter. I was waiting for a suitable opportunity to fulfill it”.

Sikorsky considered the invention of light maneuvering machines with vertical take-off to be his greatest merit: “When you need to save a person, the plane can fly in and drop flowers on him. Only a helicopter can help in a difficult situation. ”

Since 1939, the inventor has focused on the construction of helicopters.

Until 1939, Sikorsky created about fifteen types of aircraft; since 1939 he switched to the design of helicopters (single-rotor circuits, with swashplate), which were widely used. The first experimental Vought-Sikorsky 300 helicopter, created in the USA by Sikorsky, took off from the ground on September 14, 1939. In essence, this was a modernized version of his first Russian helicopter, created back in July 1909.

Over 16 years of work, Sikorsky created 15 types of aircraft. His “flying ships” were the first to fly across the Pacific and Atlantic Ocean, and amphibious aircraft began to land on the water.

Thanks to his genius, mankind received turbine helicopters, amphibious helicopters, flying cranes. The S-42 model set 10 world records at once. Igor Sikorsky invented his last car at the age of 80; the world speed record shown by this helicopter is not beaten till nowadays.

Igor Sikorsky always tested his aircraft himself. And always had his favourite hat – Fedora. After the successful outcome of several accidents, Sikorsky considered Fedora a talisman. Until now, young pilots believe in Fedora symbol. Students of the Kyiv Polytechnic University come to the bronze “Fedora” monument to Sikorsky before a difficult exam.