Home » News » Why Kiev Should Be on Your Bucket List 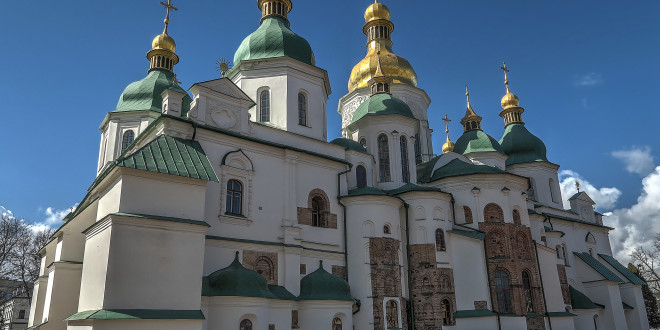 For Your kind attention here is a repost of the article from https://www.thedailybeast.com
SCOTT BAY – the author – is giving his explanation why Kiev should be in Your travel wish list and what do you need to see in Kiev.

MUST-SEE
Why Kiev Should Be on Your Architecture Bucket List
From golden-domed baroque cathedrals to heartbreaking emotional art nouveau mansions, Ukraine’s capital is an architectural feast.
SCOTT BAY
07.24.18 5:14 AM ET
Kiev is the capital of Ukraine, and like most capital cities of Europe, it’s chock-full of incredible historic sites.

But when walking the streets of Kiev, it feels like nowhere else in Europe—its architecture is equally as diverse in style as it is compelling and playfully designed. One step, art nouveau, next step, Ukrainian Baroque, turn your gaze, Soviet Modernism. This list could continue—there are over 30 unique architectural styles in Kiev’s metro area alone.

Yes, Ukraine is a little off the beaten track from the standard 30-day European tourist jaunt (U.K., France, Italy). But, architectural masters such as Bartolomeo Rastrelli, Emilio Sala, Wladyslaw Horodecki have shaped this enchanting city for the last 14 centuries (no big deal). Kiev is one of the oldest cities in Eastern Europe and is fundamental to the historical formation of the Ukrainian nation. Trust us, you won’t regret adding Kiev to your next European itinerary. The city it all: food, culture, history, and, perhaps most important, stunning architecture.

Kiev has a nickname: the City of Domes. The Ukrainian capital is home to more than 950 churches and cathedrals, many of which are ordained with golden onion-shaped domes. But St. Sophia’s sticks out as one of the cities most beloved cathedrals. The 11th-century cathedral—one of the oldest in the city and the first heritage site in Ukraine to be included on the World Heritage List—was first designed to show gratitude to the citizens of Novgorod (a 6th-century Russian city). Under the reign of the Grand Prince of Kievan Rus, aka Vladimir the Great, St. Sophia’s foundation was laid in 1011, but took nearly two decades to complete the structure. It lived on as a church until the Russian Revolution of 1917 when the government tried to destroy the cathedral. Thanks to historians of the time, the structure was preserved. And since the fall of the Soviet Union, came the Orthodox Cathedral that St. Sophia’s is today. Its history alone should draw any curious traveler as there are sections of St. Sophia that are original to its original ideation—really incredible to witness.

One definition of chimera is, “a thing that is hoped or wished for but in fact is illusory or impossible to achieve.” This historical residence was designed and constructed by architect Wladyslaw Horodecki, best known for his architectural additions to urban Kiev in the early 1900s.  The house of Chimeras was built to showcase Horodecki’s “hunting trophies” adorned in concrete (the new material of the time), both inside and outside his residence. He embellished the building with elephants, ostrich legs, crocodiles, and other fabulous creatures. Locals say their favorite time to admire the House of Chimeras is after dark where you can “see the eerie creatures come alive and jump off the roof.” Today it’s used as Kiev’s presidential residence for official and diplomatic ceremonies.

This fairy-tale castle is home to the oldest puppet theater in Kiev. The quirk of this structure is almost too much to take seriously. Towering steeples, grand halls, clock towers, and sculptures of fairy characters seem like they’re straight out of a children’s book. The theater was completed in 1927 and hosts around 300 guests in one tower and about 100 guests in the other for the puppet shows. You don’t need to be a child to appreciate the storybook magic of this structure and become enchanted by attending the performances that showcase marionettes more than 80 years old.