Home » News » Things to do in Kiev: The Chocolate house 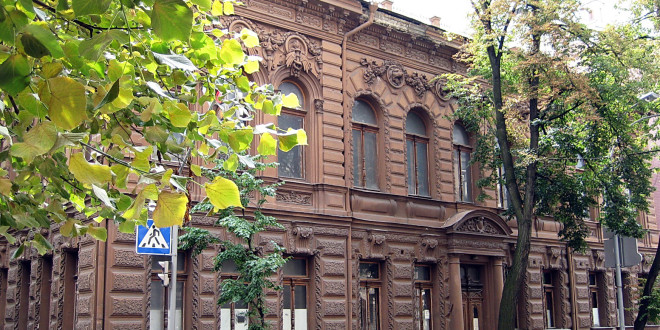 Things to do in Kiev: The Chocolate house

In order to learn more about Kiev history there is one more ‘must see’ place in your travel list.

The main city street Khreschatyk was dramatically damaged during the Second World War. But very close to it you may find so called German district – Lutheran and Shovkovychna streets.  Those streets are among the oldest in the city and original mansions of merchants can be seen there nowadays.

One of the oldest mansions in Kiev has very tasty name – the Chocolate house.

The name “chocolate house” is associated only with the appearance of the house, or rather its color of the outside walls. There are no more connections with our beloved sweets.

During our walking Kiev tour you will learn history of this house which lasts for 130 year and is rich in various events.

The house was built by the famous architect Vladymyr Nikolaev for the merchant of the first guild (modern so called oligarch) Semen Mogilevtsev. Among other Nikolaev’s works which can be seen today are the Refectory Church of the Kiev Cave mnastery, building of the National Philharmonic, monument to Bogdan Khmelnitsky, monument to Glinka, Tereshchenko mansion (now – Kiev Museum of Russian Art) and others.

House has been built for about two years – from 1899 to 1901 year and consisted of two floors in the Venetian Renaissance style. House area is 900 square meters! At the first glance it may be seem that the house is painted in one color. However, this is not quite true. For its painting were used several shades of chocolate, different intensity, in order to emphasize the variety of facade elements.

The peculiarity of the interior decoration of the building is that under the same roof different architectural styles were harmoniously connected. Here you can see Art Nouveau, Gothic and Renaissance, and Baroque. There was a commercial office on the first floor, and front floor with beautiful marble staircase with cast bronze railing in the Empire style is on the second.

Each room of the second floor is performed in a different its own style and belongs to certain country. Rooms are decorated with stucco work on the ceilings, mirrors, paintings on the walls and ceilings, window sills are made of marb

le and carved doors and furniture are carefully selected to match a particular style. The very construction is made in the spirit of palace architecture, which means that on the floor almost all the rooms are communicating and indoor not available. This architectural design was very convenient for various receptions and special events, because each new room with its own unique style meant changing experience for guests.

The largest room – White room – has an area of 92 square meters, the most elegant and rich, made in the style of the French Baroque. It was used for Once in dancing evenings and celebrations. The decoration of the room was a fireplace, and a huge chandelier adorned with gold cupids. Byzantine hall was originally considered as a formal dining room: large garlands framing the room, full of fruit image. Moorish room size is quite small, but no less beautiful. Its walls are decorated with carved panels, made of plaster. Paintings Russian Hall hit his intensity of color, and in fact managed to open them with great difficulty (for it from the walls was removed from 7 to 20 layers of paint). 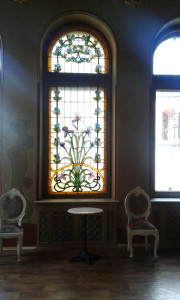 Initially there was a large beautiful garden close to the house, on the site which is now located two adjacent buildings.

For a long time this romantic house belonged to a merchant of the 1st Guild Semen Mogilevtsev.

In Soviet times, from 1960 to 1983, the house was the central registry office in Kiev. It was a pretty elite place for honeymooners. In the pre-war Soviet years there were communal apartments.

On April 2, 2009 the mansion was transferred to the museum of Russian art. Since February 17, 2010 it Children’s Art Gallery and hosts art exhibitions, classical music concerts, children’s events, lectures on the history of art for children and adults, in the halls of the mansion tours, recitals and other cultural events.

If you would like to feel the history, yourkievguide.com recommends seeing this local Kiev sightseeing on your own eyes.