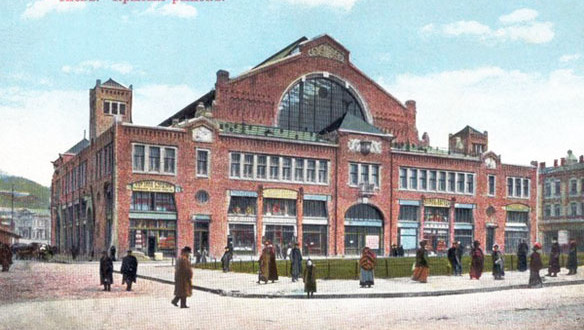 One of the things to do in Kiev if you are staying for some days and have free time is to visit the oldest food market. This place is for sure will impress foodie traveler and enrich your impression about Ukraine in the whole.

So let’s have a short travel to Kiev Bessarabian market.

Bessarabian market (Bessarabka) is famous not only because of the first indoor building food market in Ukraine, but also because of the primary construction that we can see practically in its original appearance.

The name of the marker can be hardly understood by non-Ukrainians. Although for natives it is not something strange. That was how poor people were called. From the etymology point of view “bessarab” means the common man or even bastard. Besides, according to the history such classes of people were living in huts nearby. 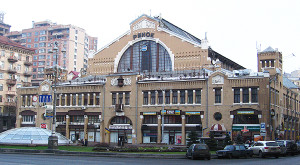 In the end of XVIII and first beginning of XIX century Bessarabka (as just peace of ground) was only the suburb of ancient Kiev. There were a frontier post and post-station where travelers could change their horses or just buy whatever they wanted. Even in that time there was a little group of street venders.

In 1837 Kiev was divided into six districts and new buildings were started to erect. That was done due to Vincent Beretti’s plan of housing system. And since that time Bessarabian square has been included to the urban zone. When Kreshchatik, Velyka Vasylkivska, Antonovicha streets and Lva Tolstogo square were built up with beautiful houses, administrative buildings and luxury apartments, Bessarabka spoiled the whole shape of the city – row of shopping stalls was a bit strange near fashionable hotels and elegant buildings. But local government did not have money for erecting the suitable market’s construction. Fortunately, Maecenas Lazar Brodsky entrusted Kiev with building indoor market. 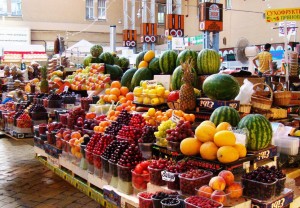 In 1908 a competition for the best architecture project was announced. And the winner was Henry Gai, the designer of indoor market in Warsaw and buildings in Minsk.  According to the Henry Gai project there were: 31outdoor shops, arestaurant and a big shopping hall with 88 rows of meat and salo (salt pork fat) shopping stalls; 88 rows of fruits and vegetables shopping stalls; 27 rows of fish shopping. The facade of the building was covered by different sculptures and paintings. And finally 4 years later on 3 July 1912  Bessarabian market was opened. 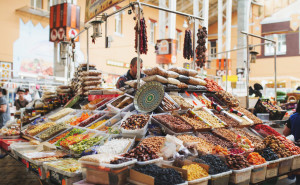 ssarabka was the only building survived in times of Second World War and this is one more reason to visit it.

Nowadays here you will 100% find any product you may desire starting from some rare fruits and vegetables and finishing with black caviar. Between locals Bessarabka is known as a marketplace for rich people. That is why you may easily meet here some politicians, artists or local singer. While planning your Kiev visit pay your attention on this tourist attraction place.

Our tour guide includes this city sightseeing in the private Kiev tour and would recommend you to see it too.

Wishing you true happiness and full (not overfull) stomach!

See our short video about this Kiev sightseeing!