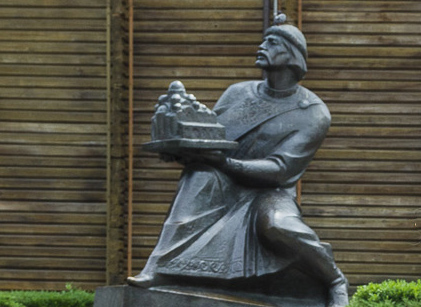 Yaroslav the Wise – grand duke of Kiev, son of Vladimir Velikiy (Vladimir the Great). Age of Yaroslavl’s Mudriy reign became the age of the fullest flower of the Kievan Rus.

In year 1036 he gained a magnificent victory over the pechenegs and thereby rescued Kievan Rus from their incursions. But the significance of Yaroslav for Kievan Rus’s history is based mostly not on his successful wars but on his works on the internal order of the state. Yaroslav Mudriy promoted the development of Christianity and enlightenment. He founded The Golden Gates and St. Sofia Cathedral in Kiev and encircled Kiev with unassailable barrages.

Yaroslav is also known as a lawmaker — in time of his reign an ancient Russian law codex was issued — it is called Russkaya Pravda (The Russian Truth).

In his testament, Yaroslav sought to prevent a power struggle among his five sons by dividing his empire among them and enjoining the younger four sons to obey the eldest, Izyaslav, who was to succeed his father as grand prince of Kiev. This advice had no lasting effect, and civil war ensued after Yaroslav’s death.

You may visit this monument during Kiev history tour.