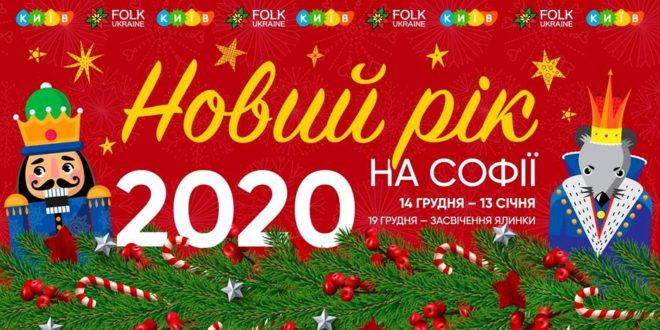 What to do on Christmas in Kiev? New photo locations, stylish Christmas tree, souvenirs market and outdoors ice rinks  are organized for winter holidays.

Folk Ukraine invites You to celebrate Christmas and New Year 2020 in the capital of Ukraine – Kiev!

You will find here different zones:

Festival concerts will be organized almost every day, namely:

A number of state orchestras and popular performers are planning to appear on the stage – Pianoboy, S.K.A.I. and TNMK groups.

What and when: Calendar of Christmas celebrations in Kiev!

December 19 –Gala opening of the Christmas tree on Sophia sq.

HOW MUCH: free entrance.

Second official location is organized on Kontraktova Square  In addition to the traditional fairs and food courts St. Nicholas residence will be arranged here as well.

WHEN: December 7 until March 1.

HOW MUCH: free entrance.

Traditionally, for the fourth year, the Winter Country operates at the capital’s VDNH. The residence of Santa Claus and the Castle of Ice Sculptures are opened there.

There are also a festive fair and a puppet theater for children.

WHEN: December 7 until March 1.

This year Roshen Confectionery Corporation has launched its own New Year’s location for the first time.

An ice rink has already been installed on the public space near the Roshen plant, which is one of the largest in Ukraine – almost two thousand square meters. In the Roshen Winter Village itself, there are a festive fair, a food court, and, of course, a Christmas tree. The organizers promise to open fountains next year.

WHEN: December 7 until March 8.

Where to buy gifts in Kiev?