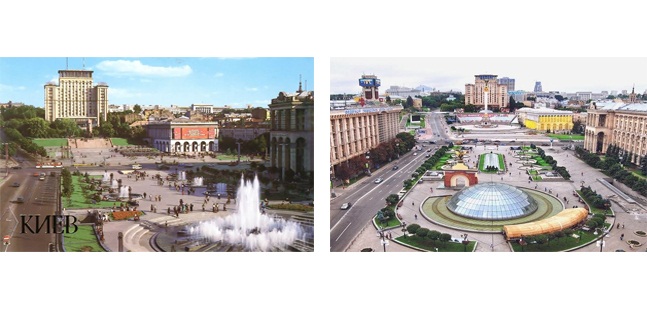 Independence Square or Maidan Nezalezhnosti is a central Kiev square.

This place has been unwilled witness of many historical events.

Now it is difficult to imagine that central city square was the impenetrable forest 10 centuries ago.

In this area there were so-called Lyadsky gates in times of Yaroslav the Wise.

The first big brick building was built in 1851 and soon Kreshchatyk became a place of restaurants, hotels, and shops.

In 1876 after the City Duma building – city government – was erected and this place became known as Duma.

After Kiev liberation Kreshchatyk area was reconstructed and announced as a main square of the city.

Bessarabian market is the oldest building and the only one which was not destroyed during the Second World War.

In 1991 this square received modern name after the proclamation of Ukraine independence.

In 1976, Subway station “Maydan Nezalezhnosti” was opened. It changed its name as well as the area

Usually Independence Square is pedestrian on weekends and state holidays.

During the European football championship EURO-2012 there was the official fan zone and live broadcast of the football on the big screen.

Sometimes the area is used as a place for political protests and demonstrations.

In 2004 the famous “Orange revolution” took place there.

There you can find very interesting place – starting point or ‘zero’ km of the distances between the cities of Ukraine and the major capitals of the world.

2016-02-07
superadmin
Previous Tour to Yanukovych villa in Mezhyhirya
Next Kiev Motherland vs Statue of Liberty – which is higher?