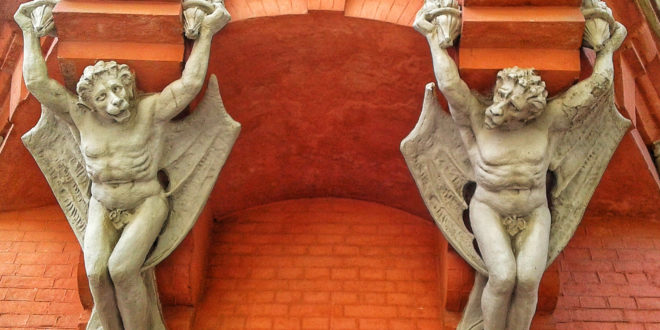 During your Kiev visit you will be amazed with the local architecture and, for sure, so called Baron’s Castle is must sight in Kiev . In reality this Castle has nothing to do with Baron, but it became known so thanks to it’s totally outstanding Gothic style. Castle is located on Yaroslaviv Val street, named after famouse Kievan Rus Duke – Yaroslav the wise. Let’s make our small trip to this remarkable Kiev sight!

Who was the real owner of the Gothic Castle in Kiev?

Until the first half of the XIX century, the current Yaroslavov Val street was indeed Yaroslav’s shaft – meaning, the part of the ancient Russian earth fortifications. Only in the 1830s the shafts of Old Kiev started to be break down, and new streets were laid on the vacant site and new plots for building were created.

And at the end of 1892 wealthy aristocrat Mikhail Podgorsky bought the area on Yaroslav’s Val.

Mikhail Ignatievich Podgorsky was Polish by origin and owned extensive estates in the Kiev and Volyn provinces. He became pretty famous and successful f in various fields of agriculture. So, having significant forest properties, he was engaged in forestry.

Plus to this, he started a solid fishery. In 1897 at the Kiev Agricultural and Industrial Exhibition Podgorsky received a gold medal in the “Fishery”category.

Unknown arhitector of the Castle

Landowner Mikhail Podgorsky decided not to “hit his face in the mud” before his competitors – merchants and entrepreneurs – and surprise the city with something exotic. It was a time when Richard Castle, the House with chimeras plans was on the way. The choice of the landlord fell on the civil engineer Nikolai Dobachevsky, who, despite his youth, had traveled half the world and even participated in the construction of the Panama Canal. The talented architect proposed a sketch that could serve as a wonderful introductory tale for novels about wandering knights. M.Podgorsky was satisfied.

The name of Dobachevsky did not become the part of Kiev history as, for example, Gorodetsky, Shiman, Schill, Schleifer and other renowned architects. But the wonderful “knight’s castle” at the Golden Gate for more than a hundred years breathes the winds of distant wanderings and recalls his romantic author.

Podgorsky was not lucky enough to own an outstanding castle on Yaroslav Val for a long period. In 1899, the 53-year-old magnate died in Berlin. His Kiev estate passed first to his mother Augustine Podgorska, then to her brother Leon. Lately it was acquired by the nobleman Karl Yaroshinsky.

All this time, the “castle” was a usual apartment house, most of its premises were used as residential apartments. Of course, it was very popular: the famous postcard publisher Dmitry Markov even included it in a limited photo collection “Kyiv. Beautiful buildings “.

Till nowadays house is guarded by the gothic creatures.

Visitors are welcomed by the Latin greeting “SALVE”(meaning “Hello”) at the threshold of the main entrance.

According to the plan of the builders, one floor should have been occupied by one apartment from ten to fifteen rooms. But on the first floor, on the contrary, all room are small, the aisles are narrow, as these rooms were intended for servants.

Before Revolution there was a café-confectionery “At the Golden Gate” in the lower floor of the “castle”.

Since 1916, the largest sugar producer, Lev Brodsky, became the owner of this outstanding building. And the most probably he remained the titleholder of the “castle” until the revolution.

By the way his niece, Clara, in her marriage was known as Baroness Ginzburg. But he himself, although considered one of the “sugar kings”, did not carry the baron’s title – like the previous owners of the “castle”.

At the beginning of 1918, some rooms were rented by the editorial office of the newspaper “Our thoughts”. The bakery of the First Jewish Consumer Society was placed in the basement.

In 1918, the first President of Czechoslovakia Tomas Masaryk had visited that house and the National Council took place here.

Castle in the Soviet times

In the historical perturbations of the twentieth century, the “castle” was lucky to survive. It remained unharmed during the radical reconstruction of Kiev in the 1930s.

Since the twenties of the last century, and until very recently, the “baron’s castle” was a house with communal apartments. Communal life, perhaps, was not particularly attractive, but still the house was located in a very favorable place, in the heart of the city. Therefore, the epic with the residents removal unfolded about a decade ago, was very tense and really reminiscent of military operations with disconnections of water and light. At the beginning of the two thousand years, the “castle of the baron” was released from the tenants. Since then, the house is empty, but under protection.

For sure this place is one of the “must see” sights in your what to do list in Kiev.

kiev city tour kiev guide kiev must see sights kiev private guide Kiev tour visit Kiev visit Kyiv what to do in Kiev what to to 2017-12-10
superadmin
Previous Where to eat: panoramic places in Kiev
Next What to do in Kiev in winter?